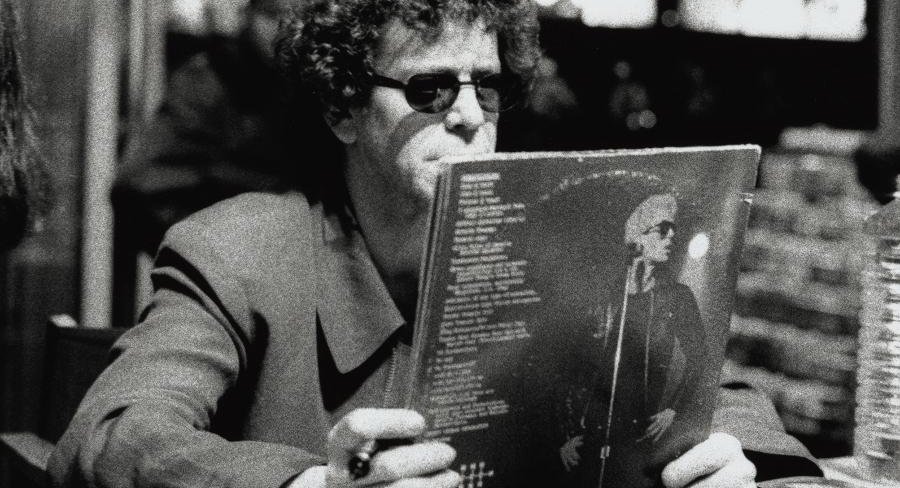 Nobody wrote songs about New York quite like Lou Reed. Songs like “Perfect Day,” about spending time in the park, but also songs like “Waiting For The Man,” his bruising tale of going uptown to score drugs.

So it makes sense that his archives would remain here in the city – but it almost didn’t happen.

Before his death in 2013, Reed left his archives to his wife, the musician and multimedia artist Laurie Anderson, who wanted to get the 600 hours of audio and video tapes digitized. The Ransom Center at the University of Texas agreed to do it, but when Anderson heard that people would be allowed to carry guns on campus, she decided to move it elsewhere.

The New York Public Library exhibit, called “Lou Reed: Caught Between the Twisted Stars,” is the result of her long effort to figure out what was in the archive, where it should go, and perhaps most importantly, who should have access.

“I wanna have this open to any young kid who’s a musician and wants to go and hear a bunch of Lou’s rehearsals,” Anderson explained. “And they can do that. For free.”

She credits Jonathan Hiam, formerly a curator at the library, for making it possible to move the archives there.

Not at all, says Don Fleming, one of the exhibit’s two curators.

“It was just amazing to be able to open it up and see where a tour manager had an envelope full of receipts,” he said. “Here they are at a toll booth in Ohio, on a particular day and time, and just the level of what you get from that is not something you can find anywhere else. There’s a large amount of that, so for people who want to write about Lou or do books or study him, it’s amazing.”

What you won’t find in the archives are lots of early drafts of songs, for a reason that might drive other songwriters crazy.

“He would just wake up and write the song down. It was infuriating,” Anderson recalled. (For the record, she was laughing, not furious.) “Just complete – he wouldn’t change a single thing; that was it.”

The big news from the archive is already making headlines, and when asked for his favorite part of the exhibition, Don Fleming went straight there.

“Overall, probably the 1965 tape,” he said, “the one that Lou mailed to himself – the first demos he ever did of iconic songs like ‘Heroin,’ ‘Waiting for the Man’ and ‘Pale Blue Eyes.’ The tape had never been opened, no one had ever heard it. He mailed it himself as a poor man’s copyright. So that was the big, exciting find, and for Jason and I, we found it right at the end of the process.”

“Jason” is fellow archivist and curator Jason Stern, who pointed out that the archives have way more material than could fit in the library’s exhibition. But, he noted, “the great thing about the NYPL and the collection being here is that anyone can walk right in, go to one of these computers and pull up the Finding Aid, and search through all the collection of tapes and videos, and cue up whatever they want to listen to. If they want to hear that May 1965 tape of Lou and John (John Cale, who co-founded the band The Velvet Underground with Reed), they can pull that up and listen to the audio.”

That audio is startling: some of Lou Reed’s darkest rock numbers, performed in a style you’d expect to hear in a Greenwich Village folk club of the time. It’s also an early example of Reed as collaborator. He famously worked with John Cale and the rest of the Velvet Underground, as well as Andy Warhol, David Bowie and many others.

But Laurie Anderson said his biggest collaborator was Hal Willner, the late record producer and music supervisor for “Saturday Night Live.” Wilner’s studio is faithfully recreated in one room of the exhibition, right down to the stacks of LPs and his unsettling collection of ventriloquist dummies. (There’s one in the image of Anderson herself, though it’s fairly well hidden.)

“Lou and Wilner did a radio show called ‘New York Shuffle,’” she said. “That’s an incredible part of the collection, as are so many early versions of songs – the early version of ‘Perfect Day’ was ‘it’s such a… summer’s day.’ Just another summer day. So you see an artist putting together his sound, his world, his words.”

That particular clip isn’t in the exhibition, though many of Reed’s demos, outtakes and rehearsals are going to be released through a collaboration with the record label Light in the Attic. The 1965 demo tape will be first, coming in August of this year.

Anderson also points out that while Lou Reed’s songs were set in the Big Apple, the characters were never anonymous. “They had names; they had stories,” she said, before quoting Reed’s famous song about the New York demimonde, “Walk On The Wild Side.”

“’Little Joe never once…’ ‘Candy from out on the island…’ – he was a Shakespearean panoply of characters. And they’re all New Yorkers, and there they are, living in the library.”

“Lou Reed: Caught Between the Twisted Stars” is at the New York Public Library for the Performing Arts at Lincoln Center through March 4, 2023.

Does It Still Make Sense to Buy Mercedes Diesel Cars or SUVs?

5 Superstars Who Could be Traded this Offseason

To confront rising sea levels, an NYC artist invites you to stand in the East River for 12 hours