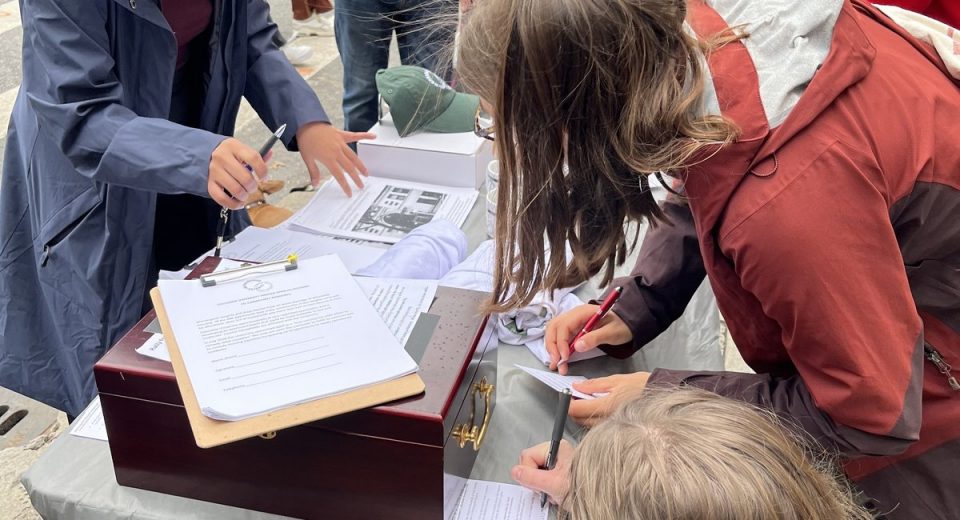 Columbia University has long provided off-campus housing to graduate students, faculty and others affiliated with the university. But as the school continues to expand its already gargantuan footprint, some neighbors in Morningside Heights are urging the university to provide affordable housing to non-Columbia residents as well.

“We think that’s a good way to preserve the diversity of our community,” said Dan McSweeney, an organizer with the JUST Housing Committee, a group recently formed by members of the Morningside Heights Community Coalition and other residents. He and others who spoke at a rally Sunday expressed fears of Columbia creating a monoculture and squeezing longtime residents out.

“We want to be a real neighborhood and that means that we need to have people living here that have different means,” McSweeney said.

One of the largest landlords in the city, Columbia currently manages 150 buildings with more than 8,000 residents, mostly located in Morningside Heights.

The JUST Housing Committee held a rally with other housing activists near the Columbia campus at West 114th Street and Broadway, where they highlighted core demands and concerns, as some students wandering past stopped to listen.

JUST Housing is asking Columbia to carve out affordable units for people who are not affiliated with the university in its new developments – including properties Columbia recently acquired on West 112th Street and at the site of a former McDonald’s on West 125th Street. They are also calling on the university to preserve existing rent-regulated units even after tenants pass away or move out, and to pass some of them on to community members not affiliated with the university. These proposals were included in a report that the group submitted to Columbia administrators in August.

Organizers said they have yet to receive a direct response from the university. But in a statement, Ben Chang, a spokesperson for Columbia, said, “We always welcome feedback and ideas from our neighbors about how we can help address the needs of our community. We are reviewing the proposal and look forward to continuing to engage constructively with our neighbors, community leaders and elected officials on a host of issues of mutual interest.”

The Morningside Heights Community Coalition has been working with City Council members since 2016 to advocate for the neighborhood to be rezoned so that new private developments have to set aside a share of their units for affordable housing. Dave Robinson, the group’s president, said at the rally it would only be fair for similar rules to apply to Columbia University as well.

Councilmember Shaun Abreu said he supports the new proposals from the JUST Housing Committee. “This would promote desperately needed safe and affordable housing and ensure that our neighbors can comfortably remain in their homes,” Abreu said in a statement provided through JUST Housing. “I look forward to working with community stakeholders to make progress on this critical issue.”

Some speakers argued that Columbia has a mutual interest in keeping the neighborhood diverse because it makes it more attractive.

Weinberg and other speakers also expressed support for the Red Balloon Early Childhood Learning Center, a nonprofit preschool that is slated to be evicted from a property owned by Columbia after being housed there rent-free since the 1970s.

“It is going to have a huge effect on affordable childcare in the neighborhood,” said Annapurna Potluri Schreiber, president of the school’s parent board, who also spoke at the rally.

Potluri Schreiber said Columbia intends to revoke the school’s lease at the end of the academic year and suggested it was a ploy to make money off of the space.

But Chang, the Columbia spokesperson, said it was a decision “based on our expectations for Columbia-affiliated early learning centers.” He did not specify which standards the school is failing to meet but said that learning centers affiliated with the university must “maintain consistent leadership and adhere to other standards set by Columbia.”

NYC ferry system must ‘stabilize’ before it can expand, officials say