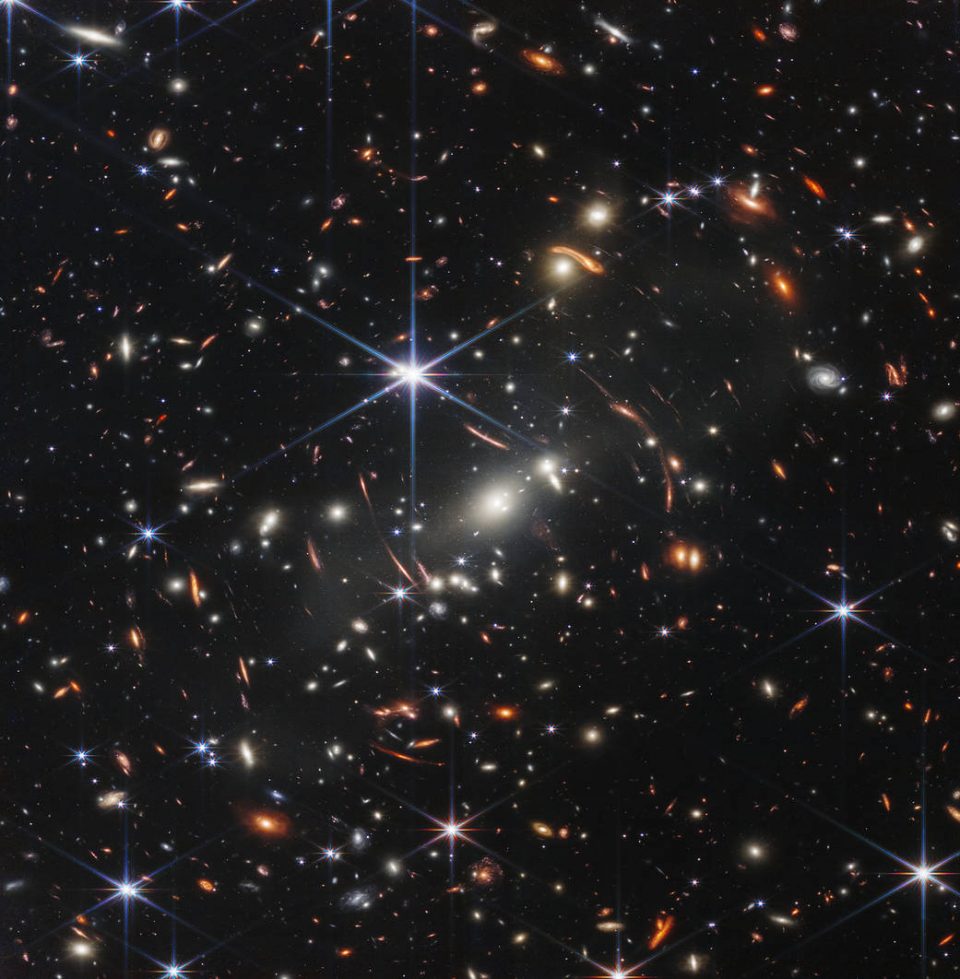 President Joe Biden got in on today’s celebration of the first full-color image from NASA’s James Webb Space Telescope, a $10 billion observatory that’s been decades in the making. But the star of the show was the image itself, billed as the deepest and sharpest infrared view of the universe to date.

The picture shows a patch of sky where the gravitational effect of a massive galaxy cluster in the foreground, known as SMACS 0723, focuses the light rays emanating from far more distant galaxies in the background.

“This telescope embodies how America leads the world, not by the example of our power, but by the power of our example,” Biden said during today’s White House ceremony. “These images are going to remind the world that America can do big things, and remind the American people — especially our children — that there’s nothing beyond our capacity.”

NASA Administrator Bill Nelson noted that the light from some of the galaxies shown in Webb’s First Deep Field “has been traveling for over 13 billion years.”

And that’s just the start: Astronomers say future images from the James Webb Space Telescope, or JWST, are likely to exceed the distance record set today, and expand other space frontiers as well.

“The level of detail is dazzling!” University of Washington astronomer Emily Levesque told GeekWire in an email. “It’s fun to stare at the big colorful galaxy arcs that dominate the image, but I actually like looking for the tiniest and reddest little smudges lurking in the deep background. Those are the galaxies so dim and distant that we couldn’t even see them with Hubble, and those are what demonstrate the real power of JWST; there’s going to be so much we’ve never seen before!”

Still more images are due to be unveiled at 7:30 a.m. PT Tuesday. Those pictures will feature well-known celestial targets — the Carina Nebula, the Southern Ring Nebula, and a galaxy cluster known as Stephan’s Quintet. NASA will also release the spectral fingerprint of WASP-96 b, a Jupiter-like planet in a star system that’s nearly 1,150 light-years from Earth.

Future observations could reveal the composition of atmospheres around alien planets that are more like Earth than WASP-96 b — planets like those in the TRAPPIST-1 system, which some researchers say might be hospitable for life. A team of astronomers from the University of Washington determined that JWST could spot signs of carbon dioxide or oxygen in the atmospheres of TRAPPIST-1 planets, a mere 39 light-years away.

The Webb Space Telescope is considered an heir to the Hubble Space Telescope, which is nearing retirement after more than 30 years of operation. Webb’s 21-foot-wide, segmented mirror has seven times the light-gathering capacity of Hubble’s mirror. Just as significantly, JWST is optimized to observe celestial objects in infrared wavelengths, rather than the wide sweep of infrared-to-ultraviolet wavelengths covered by Hubble.

That focus on the infrared means JWST is well-suited for probing the redshifted edges of the observable universe, as well as infant planets that are wrapped inside clouds of dust. It also means pictures from the telescope will typically be processed to bring out colors not visible to the naked eye.

The 7-ton space telescope was launched atop a European Ariane 5 rocket last Christmas Day, and went through a months-long commissioning process at a gravitational balance point a million miles from Earth.

In contrast with Hubble’s troubled start in 1990, Webb’s deployment was glitch-free — but the mission has faced more than the usual share of controversy over the years. JWST, which started out with a price tag of $3.5 billion and a projected launch date of 2013, went through repeated rounds of cost overruns and scheduling delays.

Some scientists are upset that JWST is named after a former NASA administrator who headed the agency during a time of government discrimination against gay and lesbian employees, and they’ve pressed NASA to rename the telescope.

“I’d love to be unreservedly stoked about the mission,” Lucianne Walkowicz, an astronomer at the Adler Planetarium in Chicago, said in a tweet. “But at this point NASA digging its heels in, combined with watching my fellow scientists and science communicators deciding they can just turn off … the part of their brain that’s bothered, is just too much.”

Another leading critic of the telescope’s name — Chanda Prescod-Weinstein, an astrophysicist at the University of New Hampshire who was formerly a research associate at the University of Washington — said she was nevertheless looking forward to the fruits of the mission.

“I’m so excited to see what the Just Wonderful Space Telescope will teach us,” Prescod-Weinstein wrote in a tweet.

Check back for updates to this story after Tuesday’s full unveiling of JWST’s first images. The images will be featured on PBS on Wednesday in a NOVA documentary titled “Ultimate Space Telescope.”