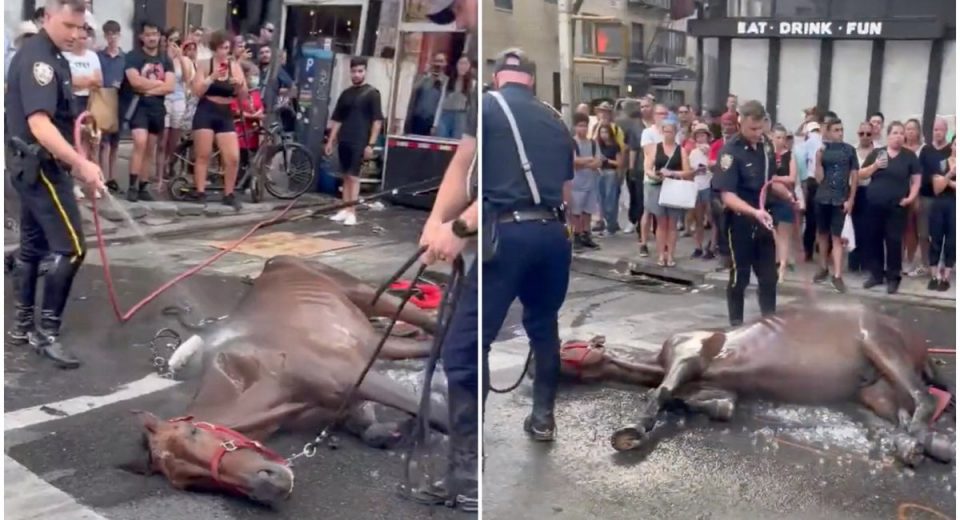 A carriage horse collapsed onto a Manhattan street on Wednesday evening, drawing a crowd of spectators and a team of police officers who hosed it off with water before getting it back on its feet.

The incident occurred around 5 p.m. when a 14-year-old male horse named Ryder collapsed at 42nd Street and 9th Avenue in Hell’s Kitchen, officials said. Videos taken by eye-witnesses showed Ryder laying motionless on the street as officers sprayed him with a hose before he slowly stood back up on his feet and was carted away.

Sean Fedigan was on his dinner break in the area when he encountered the scene as officers were tending to the horse.

“I just thought it was unusual,” he told Gothamist on Wednesday. “I’ve seen these horses all over New York City, but usually in the heat, they don’t let them out for that long period of time. And this horse seemed either young or smaller, so I don’t know if it should have been pulling a buggy on a day like today.”

Fedigan captured the moment the horse finally got up on video.

The NYPD would not confirm what caused the horse to fall over and referred all inquiries to representatives of the carriage drivers. Pete Donohue, a spokesman for Transport Workers Union Local 100, the group that represents horse carriage drivers, said the horse was suffering from equine protozoal myeloencephalitis, a neurological disease horses can contract from eating infected opossum droppings, and not heat exhaustion.

“That’s what this appears to be according to the expert who has examined the horse,” Donohue said, “We urge everyone not to jump to conclusions and automatically assume the worst.”

Ryder, who started working as a carriage horse around April, was recovering Wednesday night and reportedly eating and drinking, Donohue said.

“People are sick to their stomachs over this,” she said in an interview with Gothamist on Wednesday night. “And so are we. And what is the City Council waiting for?”

She added, “We are so behind so many other worldwide cities that have already removed horses from the streets and replaced them with electric carriages.”

Former Mayor Bill de Blasio had tried several times throughout his two terms in office to ban horse-drawn carriages after campaigning on the promise to get it done. While he was ultimately unsuccessful, the City Council did pass legislation in 2019 making it illegal for horse-drawn carriages to operate when temperatures reach 90 degrees or above, or whenever the air temperature is 80 degrees or above and the equine heat index is at 150 or above.

Last month, Councilman Robert Holden from Queens introduced legislation that would block new licenses and replace the horse-drawn carriage industry with a horseless electric carriage instead. He reacted to a video of Wednesday’s incident on social media.

“NYC is better than this,” he said on Twitter. “My bill would prevent poor horses, like this latest one today, from suffering or dying on our streets, replacing them with clean, electric carriages like this one. Drivers would be able to work year round and earn more. Drivers and horses deserve better.”

In support of Holden’s legislation, Birnkrant said Wednesday’s events underscored the urgency with which lawmakers must act.

“This is just the latest incident of egregious animal abuse happening right out in the open,” Birnkrant said. “And it’s a perfect example of why we are demanding that [City Council] Speaker Adrienne Adams and the City Council fast-track Councilman Bob Holden’s new bill. That would finally end this abuse and cruelty and public safety risk and replace these abused carriage horses with cruelty-free electric carriages that would preserve the jobs.”

3 NJ Amazon workers have died in the last month. Federal safety officials are investigating why.