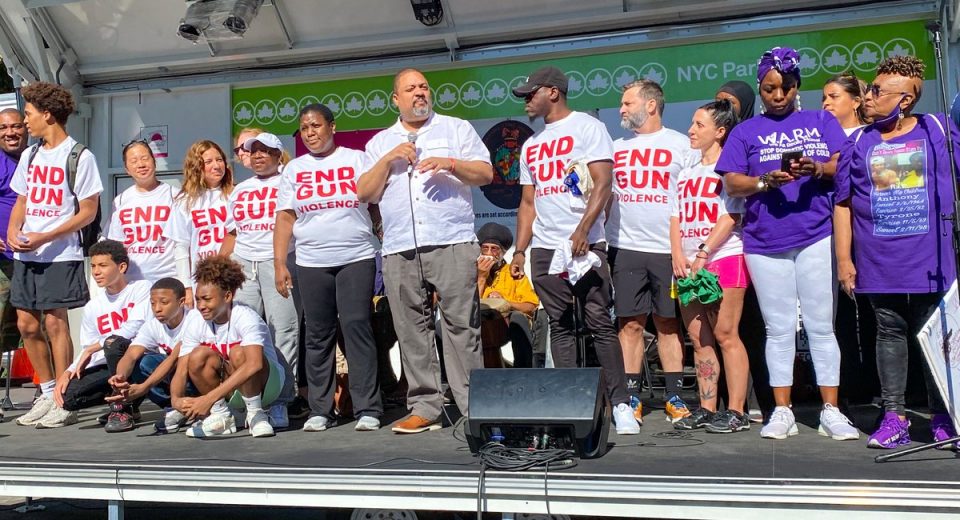 Rosa Salas, 51, came from New Jersey to get some exercise and support a cause that’s personal to her. She lost her daughter’s father in a shooting almost three decades ago, when she was four months pregnant. All these years later, it’s still hard for her to turn on the news and see the same stories.

Salas takes the subway into the city for work every day, and she said she’s been more nervous lately.

“I’m very scared all the time,” she said. “I have to, you know, make sure I’m paying attention and not be too close to the subway, and just always being very aware of my surroundings, because you never know.”

Beverly Largie said she’s felt the city change since the start of the pandemic.

“It’s brought up a lot of fears in people,” she said.

Largie came with a group of walkers from the Parkchester Senior Center in the Bronx. She said she mostly stays inside after dark, and so do most of her older friends. But she wants something better for younger New Yorkers, so she’s trying to set a good example.

“It’s like you’re putting a pebble in the water. You drop it in and it has ripple effects,” Largie said. “So that’s what we have to do: be that pebble.”

Carmen Hernandez, 71, also from the Bronx, said it takes a village to stop gun violence. And she’s frustrated that politics often seem to get in the way.

“I just don’t understand why they shut the gun law down,” she said, referring to the recent U.S. Supreme Court ruling that overturned New York’s strict concealed carry law, which had been in place since 1911. “Doing that is bringing out more gun violence.”

“This is the new America,” said her friend Maria Gonzalez, 77.

Both women want to see more support for police. As they walked, Gonzalez waved over officers along the route and gave them hugs.

Most popular stories on GeekWire for the week of Aug. 7, 2022 – GeekWire