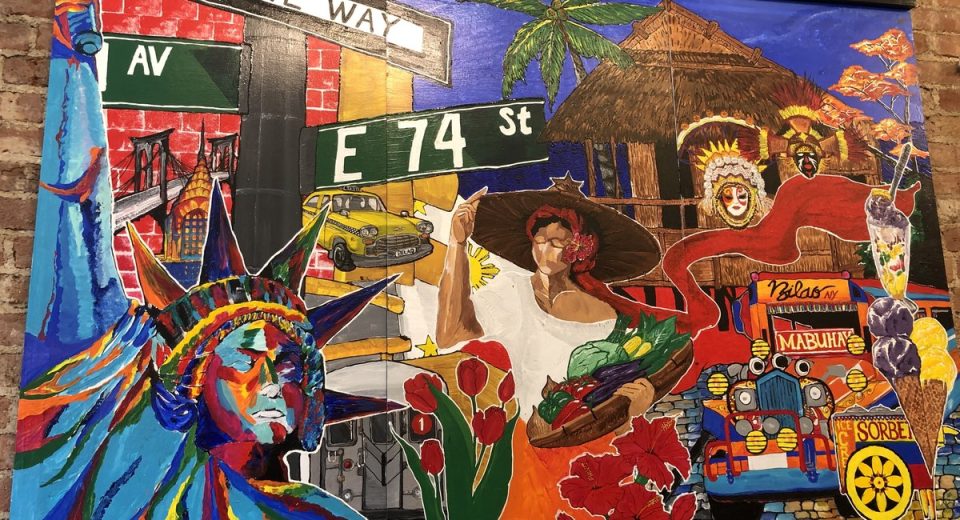 Renee Dizon didn’t set out to build a way of life for Filipinos in Queens. But three decades after she and her husband established a modest restaurant in Woodside, that is what it has become. Before Jeepney and Maharlika, before Lumpia Shack and Instagram-famous ube pastries, there was Renee’s Kitchenette & Grill.

Dizon had started out small, selling tocino, empanadas, longganisa and siopao to local Filipino grocery stores after her husband lost his job and she became pregnant, which made it difficult to commute from Queens to her office in New Jersey.

They established a brick-and-mortar presence in 1992, a four-table space on 69th Street that outlasted the other two Filipino restaurants Dizon remembers being in operation when they opened.

Two years later, they moved into their current location on Roosevelt Avenue. On quiet days, the clanging of a traveling 7 train right outside the window accompanies conversation.

The cooks in her kitchen have been around for decades.

“They didn’t leave me,” Dizon said recently, on a warm, rainy November day. “That’s probably one reason why we’re here: The food didn’t change at all.”

What Dizon and her family have built for the local Filipino community is something of a rarely celebrated success story amid fits and starts for the cuisine, as restaurateurs try to deepen its notches within the most brutal and unforgiving culinary landscape in the U.S.: New York City.

Filipino dining in the five boroughs has become more visible since food writers provided the earliest whiffs of recognition in the 1980s. Breakthroughs in more recent years have included a thriving pop-up scene and the increased prominence of traditional practices like kamayan — eating with bare hands, a practice disparaged by Western invaders in historical writings, yet to this day a hallmark of celebrations in Philippine provinces.

But the cuisine’s trajectory in New York has been uneven — with the closures of coveted former success stories in Manhattan, as well as fresher fusion ventures that failed to attract stable business. Even community favorites in Queens have gone dark, shuttering havens for recent immigrants who could order breakfast in their own language.

Current and former restaurant owners, chefs, historians and diners who spoke to Gothamist say Filipino food has lingered far too long on the brink of an ascendancy predicted by culinary greats like Anthony Bourdain.

“You have reviews for Filipino restaurants in New York going back to the 1980s,” said René Alexander Orquiza Jr., an associate professor of history at Providence College who has extensively researched and written about Filipino food. “And it’s been what — 40 years now? So it’s been the next big thing for 40 years.”

That status contributes to a sense of fragility among those rooting for Filipino food’s success in New York.

“We’re good, as of the moment,” said Jude Canela, who in 2020 opened Bilao, the first Filipino restaurant on the Upper East Side, with two fellow nurses from the surgical unit at nearby Mount Sinai Hospital. “But how about next week? How about next month? There’s always the feeling that, how are we going to survive?”

‘The last vestige of culture’

Not much remains of Filipino history and culture before the arrival of foreign influence. After three centuries of Spanish rule, 50 years as an American colony and a subsequent Japanese occupation in World War II, much was lost.

“I’d go to the library and would see books upon books on Chinese, Japanese, Vietnamese history and culture,” said Nicole Ponseca, a Filipino American from southern California. Her restaurants Jeepney and Maharlika were credited with putting Filipino food on the map in New York during the early 2010s.

“Even walking down the cookbook aisle,” Ponseca said, “there was nothing for us.”

But food was the rare exception to the broader loss. Several Philippine peoples lay claim to originating kare kare, a peanut-based stew with oxtail or other meats, with the earliest accounts found among the Moro people in Mindanao, the archipelago’s southern region. The old seafood preparations found in kinilaw also predate Spain’s arrival.

“There’s some Filipinos that will argue that ceviche actually derives from kinilaw, because of the Spanish galleon trade,” Orquiza said. “When Filipino merchantmen, seamen, were traveling across the Pacific in the Spanish galleons, they brought their culinary preparations of fish to Mexico.”

The survival of these dishes, invented long before Filipinos started writing recipes down, can be attributed to celebrations and community festivities that helped to imprint recipes within a people’s memory.

“Food is one of the last — if not the last — vestige of culture we can hold onto and claim as our own,” Ponseca said.

Today, however, there are a slate of challenges unique to the business of selling Filipino food that persist, on top of the familiar tale of rising food costs, rent and other financial woes familiar to all restaurant owners.

“In this neighborhood, it was so hard to penetrate, said Canela, whose restaurant is on Manhattan’s Upper East Side. “They don’t know what Filipino… well, I mean, they do, but they don’t know that much until they taste it. Most people want to be sure it really tastes good — like, will it benefit my tongue?” he added, laughing.

And spreading the Filipino food gospel has its own complications. Cuisines from other Asian countries that have become popular throughout the world, like Chinese and Thai, have become heavily standardized in many restaurants.

The Philippines, on the other hand, comprise thousands of islands, nearly 200 dialects and warring opinions on how to cook adobo. In 2021, the Philippine government tried to standardize the recipe for Filipino adobo and faced swift backlash. That effort has since gone quiet. “Even agreeing on one version of adobo is even more complicated than agreeing on one version of barbecue in the United States,” Orquiza said.

Then there’s the divide on how to make a name for Filipino food in the U.S. Fusion restaurants have popped up over the last several years, breaking new ground in Manhattan and Brooklyn — some with shelf lives as short as a few months.

Chef Neil Syham opened Lumpia Shack as a stall in Smorgasburg in 2011. It evolved into a brick-and-mortar store in the West Village in 2014, then moved to a Crown Heights food hall, where it operated until it closed in 2018. He says he intentionally courted diners unfamiliar with Filipino food, hoping to take the cuisine to the next level.

Syham estimates that roughly three-quarters of his customers were non-Filipinos. But that strategy might have cost him. “Trying to get that customer base of non-Filipinos hindered it a little bit,” said Syham, who is now a culinary teacher at a Queens high school. He recognizes now that Lumpia Shack posed a challenge for diners with little to no exposure to Filipino food and for traditionally minded Filipinos alike.

“I had customers, specifically Filipino customers, come to my restaurant — they always would say, ‘Why would I buy your food when my lola [grandmother] cooks it better?’ And that’s the whole point of it. I want our grandmothers, our mothers, our dads, our lolas, to cook our food better than we did, but I’m trying to give you something a little different.”

Ponseca’s restaurants, on the other hand, were mainstays for Filipino representation in the city, earning widespread acclaim.

“There’s not one culture that doesn’t hold food in such high regard, whether it’s about family, time, culture,” she said, “but there’s something very specific about Filipino food and Filipino culture and Filipino identity.”

Her restaurant Jeepney ended its run last year in one of the most stylish neighborhoods in the city, after being credited with popularizing kamayan — eating food with your hands off a banana leaf. Romanticizing a practice for which her father had been ridiculed during her childhood was a kind of small justice.

Ponseca took the glamorization of Filipino food as far as it would go. She had the same expectation of her staff as any upscale French restaurant: say the names of the dishes correctly.

Maharlika shuttered in 2019, and Jeepney in 2021. Before its doors closed, Jeepney’s East Village storefront featured a sandwich board that read “God bless the Philippines,” etched in yellow and blue chalk.

It was a shred of visibility in a city that may otherwise not have noticed. Ponseca’s intent was always to change the conversation, and to do so through food.

The question is asked: So what is it about Filipino food, anyway?

“To Filipinos,” Ponseca said, “it’s a range of flavors, dishes and ingredients that we call home.”