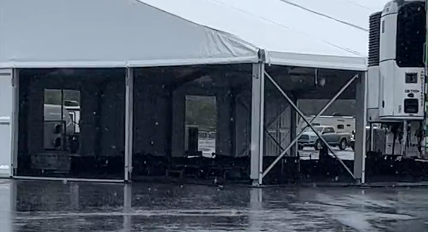 The Bronx parking lot where Mayor Eric Adams plans to temporarily house asylum seekers was flooded with several inches of water this weekend, intensifying criticism of the city’s controversial effort to ease pressure on homeless shelters.

The winterized tent facility in Orchard Beach is set to begin processing and housing thousands of Latin Americans as soon as this week – despite an array of concerns outlined by immigrant advocates about the flood-prone location.

Ariadna Phillips, an organizer with the South Bronx Mutual Aid Society, said she discovered several inches of water during her visit on Saturday. Video of the conditions prompted concerns that the coastal parking lot isn’t safe for mass housing.

“The area around the tents was significantly flooded,” Phillips said. “You could just see the water moving into the area that’s supposed to be where the beds are.”

She added that the walkways that separate the lot from the Long Island Sound were also covered by water, after the remnants of Hurricane Ian dumped less than an inch of rain on the area on Saturday. The Bronx coast remained under a coastal flood advisory through 8 p.m. on Sunday.

Kate Smart, a spokesperson for Adams, said the city was “working diligently to ensure inclement weather doesn’t affect the living quarters for asylum seekers at the humanitarian relief centers.”

“These centers are hardened to retain heat and cooling, as well as to withstand high winds, and, as we have previously said, we have evacuation plans in place if needed as well,” she added.

The Orchard Beach site is the first of the city’s “emergency relief centers” meant to house immigrants that are arriving on buses at the Port Authority each morning. But as Adams contends with a swelling homeless shelter population, his effort to alleviate one problem has garnered pushback from local officials and activists.

Sited in a federally recognized “special flood hazard area,” Orchard Beach is regularly inundated with water, even after minor rain events. Close proximity to the Long Island Sound brings both high winds and the possibility of storm surge.

Critics of the plan also note the beach is largely cut off from mass transit and nearby amenities – as well as the watchful eyes of other New Yorkers.

“With a location as distant as Orchard Beach, overseeing the City’s accountability becomes difficult,” said Karines Reyes, a Bronx Assembly Member, and one of several Bronx officials to criticize the city’s plan.

In her own statement on Sunday, Bronx Assemblymember Nathalia Fernandez said she spoke to several city officials, but left the conversations convinced Adams was “completely unprepared.”

The site at Orchard Beach, she said, “is not a suitable place for anyone to begin building the foundation of a better life.”

Adams has also faced questions about whether the new facilities will follow court-mandated rules requiring the city to provide adequate shelter to those in need of housing.

During a City Council hearing on Friday, NYC Emergency Management Commissioner Zachary Iscol argued the mandate doesn’t apply, since the centers are separate from the city’s existing homeless service providers.

In response, City Councilmember Shahana Hanif, who chairs the Committee on Immigration, accused city officials of stripping asylum seekers of their basic rights.

The flooding at Orchard Beach, she said on Sunday, only underscored her concerns about the administration’s treatment of migrants.

“The city says this is a humanitarian crisis,” she said. “But why are we rushing into an inhumane situation that will further burden, isolate, and alienate this community.”

Iscol said at Friday’s hearing the city would set up “tiger dams,” flexible tubes to prevent tidal flooding from the beach.