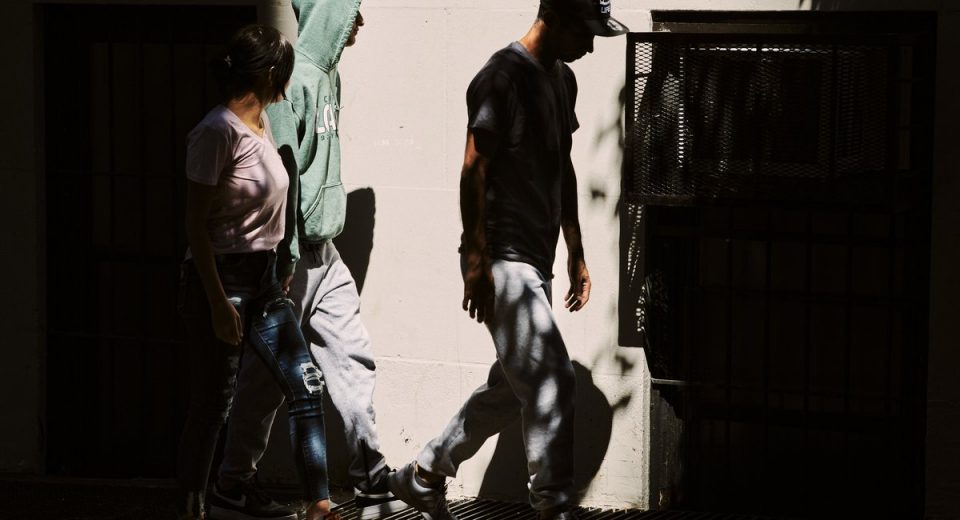 They also have free rein in the kitchen and buy groceries with cash Thielmann provides. Gonzalez said he enjoys making arepas and pasta, and on a recent evening Thielmann said they offered her what seemed to be a delicious pork loin preparation, which she had to decline because she was too tired from having awoken at 4:30 a.m. that day to greet new asylum seekers at the Port Authority.

Thielmann also cooks for her guests, as Gonzalez’s nephew and his girlfriend were finishing a breakfast of scrambled eggs prepared by their host when a reporter appeared at the home.

For Gonzalez, the situation is not something he takes for granted.

“I feel like a king,” he said. And for this, he gives thanks to Thielmann and to God.

But there are other helpers.

A visit from a fellow asylum seeker

One day after arriving, the three received a visit from another immigrant. Rafael Suarez, 25, had come to the U.S. in 2019 from Honduras, and, like the newcomers, he had also been hosted by Thielmann. Back then, he was recovering from his time at the Port Isabel Detention Center in Texas, where he spent three months.

“Those were the worst days of my life,” he said via text message.

His luck changed after arriving in New York and receiving a room in the Thielmann home. His first job was washing dishes in a restaurant, he said, and in 2020 he received his work permit and social security number. Meanwhile, he pursued a claim of asylum.

His application was based on the threat he faced in Honduras as a gay man, a problem that has been widely documented. One Honduran human rights group noted earlier this year that 405 LGBTQ Hondurans have been killed since 2009, and a report by Human Rights Watch noted that many LGBTQ asylum seekers arriving at the southern border “reported serious abuses in their countries of origin, including rape, assault, death threats, extortion, and forced disappearances or killings of romantic partners and friends.”

Against that violent backdrop, Suarez’s asylum claim was approved on Dec. 21, 2021. He remembers the exact time when his life was altered: 11:39 a.m.

“The judge told me: ‘Sir, you have been granted asylum.’”

That moment, he said, was transformative, allowing him to become gainfully employed while sending money back to his mother. Today, he works at a factory in Astoria, baking cookies for a baker whose outlets are in Manhattan. The oatmeal raisin cookies, he said, are his favorite.

More importantly, he’s able to inhabit his identity without fear of persecution.

“What really changed my life is being in this city so FREE and being able to be the way I am,” he wrote, using all caps to emphasize the word LIBRE in Spanish.

His advice for these newcomers was simple.

“I told them, welcome to this beautiful country and that they have to rest one day and the next day look for a job in order to get ahead.”

Construction worker dies on the job in Brooklyn, prompting investigation

Extra Extra: Therapists warn that Gen-Zers too committed to sobriety and virtue are missing out on life experiences