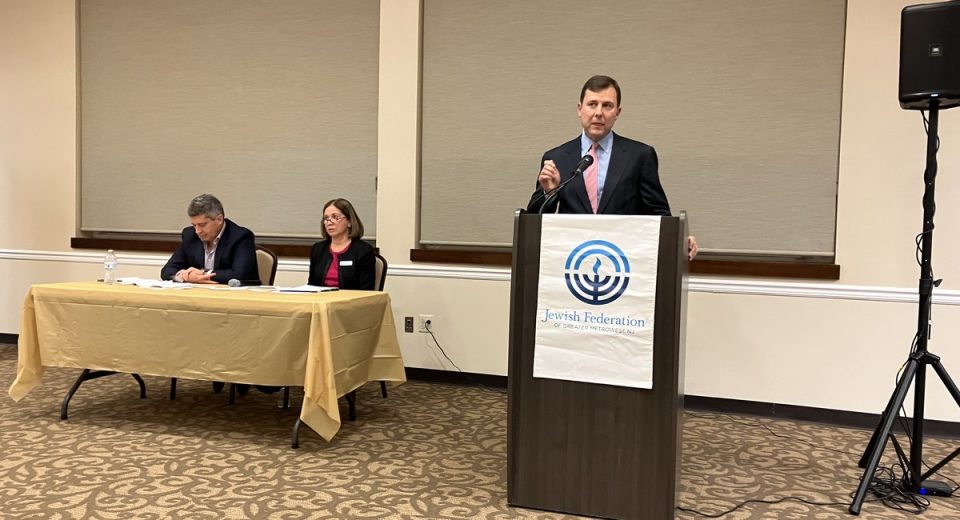 The Republican candidate in New Jersey’s most competitive congressional race mixed up his answer on abortion in his first public appearance of the campaign season.

State Sen. Tom Kean Jr. (D-Ringoes) is running against incumbent Democrat Tom Malinowski in the 7th Congressional District. The two candidates appeared Sunday evening at a forum in Scotch Plains sponsored by the Jewish Federation of Somerset, Hunterdon, and Warren Counties. It was not a debate — the two candidates appeared one at a time, and were asked the same questions.

Kean was asked whether he believes women should have a right to abortion, given the U.S. Supreme Court’s dismantling of Roe v. Wade.

“I support a woman’s right to choose. I have a 20-year career in the state legislature to support that,” Kean replied. “Like most New Jerseyans, I support reasonable restrictions — those include life and physical health and mental health of the mother and the baby, rape and incest, for example, with reasonable length of time to make a decision.”

A murmur went through the in-person audience. About 50 people attended the event, and another 200 were watching online. Then one man called out:

“So I gotta follow up with that. Do you support a woman’s right to choose or not?”

And Kean responded, “I just said I did.”

The confusion stems from Kean’s use of terms, and he looked just as surprised as the audience. The language Kean used – in one instance he referenced an exception for rape, incest or health of the mother, and in another he cited “reasonable restrictions’” – is typically offered by people who oppose abortion rights but are willing to make exceptions for those situations. But a pro-choice position doesn’t require an exception, because to be pro-choice means support for a woman’s right to make the decision herself, without restriction.

“He wasn’t describing it as he intended to,” Harrison Neely, his campaign adviser, said. “He is pro-choice within a reasonable period of time, after which he believes in exceptions.”

Neely couldn’t say exactly what that period of time is.

The audience at the Jewish Community Center in Scotch Plains was mostly made up of Malinowski supporters, and Malinowski is unequivocal in his support for a woman’s right to abortion. When it came time to take written questions from the audience, they pressed Kean to clarify his position on abortion. Kean once again mangled the response, repeating what he said the first time.

“I’ve not heard him before, only his commercials. I know he’s avoided the press. I was literally stunned. Inarticulate. Evasive,” Jane Frost-Guzzo of Fanwood said. “I was struggling even to understand him.”

She was one of a large group of mostly women who have been active in the district since the 2016 election of Donald Trump, and who have supported Malinowski since then. Frost-Guzzo said the abortion answer proved to her that Kean is trying to have it both ways, to appeal to voters who both oppose and support it.

“What does Donald Trump believe? You know, they’re saying what’s politically beneficial for them right now. Even if all these years they might have been pro-choice,” Frost-Guzzo said.

When Kean was asked about his stance on abortion, the moderator mentioned a hard-to-find webpage reported by WNYC/Gothamist, which appears to describe a harder line on abortion. The page isn’t linked from the navigation or from other pages his site, which doesn’t otherwise mention a stance abortion.

“Tom is a fierce defender of the sanctity of life, fighting every step of the way to protect the unborn from egregious abortion laws proposed in New Jersey, and will continue to do so in Congress,” the hidden page says.

Kean is the son of the ever-popular former governor, Tom Kean Sr. and served in the state legislature for 21 years. He ran against Malinowski in 2020 and lost by less than a percentage point. Following the 2021 redistricting, there are now an extra 30,000 registered Republicans in the district, and Cook Political Report lists the race as leaning toward a Kean victory.

In January, Kean voted against a New Jersey bill known as the “Freedom of Reproductive Choice Act,” which affirmed abortion as a constitutional right in New Jersey and guaranteed a “fundamental right of reproductive autonomy” to anyone in the state, including non-residents.

Early Addition: Woody Allen helped prevent a bike lane from being installed on the Upper East Side, where a cyclist just died

NY Primary: 5 things you should know after Tuesday’s election