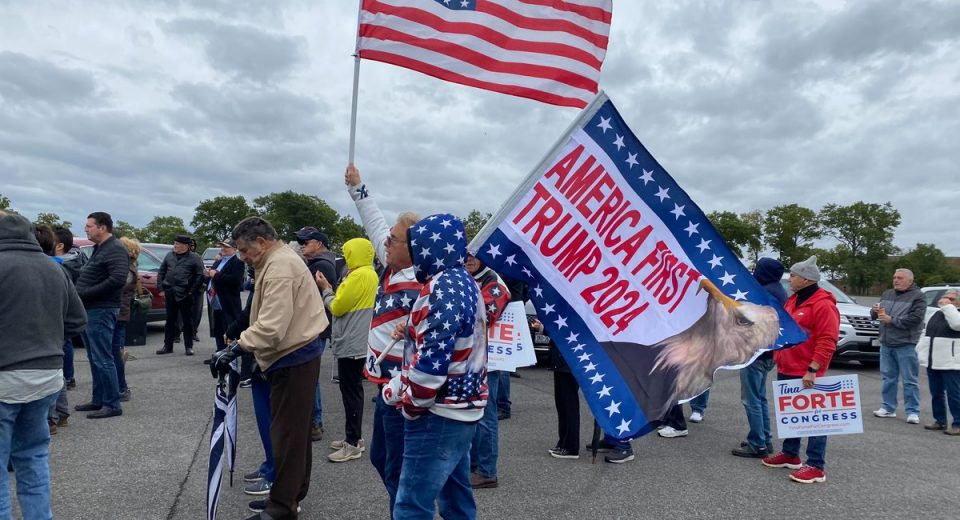 Bronx residents from across the political divide spoke out Monday against the so-called “tent city” going up in a parking lot at Orchard Beach, where Mayor Eric Adams’ administration plans to temporarily house up to 1,000 asylum seekers.

Their objections didn’t always align. Some suggested no location, in the entirety of the U.S., would be suitable for the new arrivals. Others suggested the migrants deserved better than temporary digs on a windswept parking lot.

Between 20 and 30 demonstrators gathered near where an emergency relief center is being erected as a waystation for new arrivals.

“This does not belong here!” shouted Tina Forte, a Republican candidate for Congress, as Toby Keith’s “Courtesy of the Red, White and Blue” blared from a speaker behind her.

She added: “We the people should be first. First, always. America first, not America last.”

Cries of “Send them back to where they came from!” periodically came from the crowd, where demonstrators waved Trump 2024 flags.

However, the demonstration included Democrats as well, including Al Quattlebaum, a pastor and professional chef from Co-op City who is running for the state Assembly in the 82nd District.

He said the “tent city” now emerging was being built without any input from the community or concern for the migrants.

“How dare they put immigrants in a flood zone during winter?” Quattlebaum asked of the crowd. “We’re in the middle of October and it’s cold already. How do you think they’re gonna feel in November?”

The relief centers, of which the Orchard Beach facility will be the first, were proposed by the Adams administration in response to the more than 15,000 asylum seekers who have arrived from Texas and other border states.

These include migrants who came on buses dispatched by Texas Gov. Greg Abbott. The Republican, who is ruling for re-election, has used the strategy to target President Joe Biden as being weak on border security. Meanwhile, city shelters have struggled to accommodate the new arrivals, while contending with episodes in which asylum seekers were assaulted or denied shelter.

‘Crisis’ in the city

Adams has defended the construction of relief centers, arguing that the city has been overwhelmed by the number of asylum seekers and needed to come up with new solutions.

“It is our belief that we need to treat this like the crisis that it is,” Adams said.

Over the weekend, his spokesperson Kate Smart told Gothamist the city was “working diligently to ensure inclement weather doesn’t affect the living quarters for asylum seekers” and that the facilities are “hardened to retain heat and cooling.”

However, the site in the Bronx has drawn widespread criticism, including from elected officials who have been working with the Adams administration.

“The beach is secluded, located at least an hour by bus from the closest grocery store, and will not be suitable for habitation in the rapidly approaching winter months,” said Bronx Assemblymember Nathalia Fernandez, whose district includes Allerton, Pelham Gardens and Morris Park. “Immigrants shouldn’t be treated like this anywhere, especially in a city built by immigrants.”