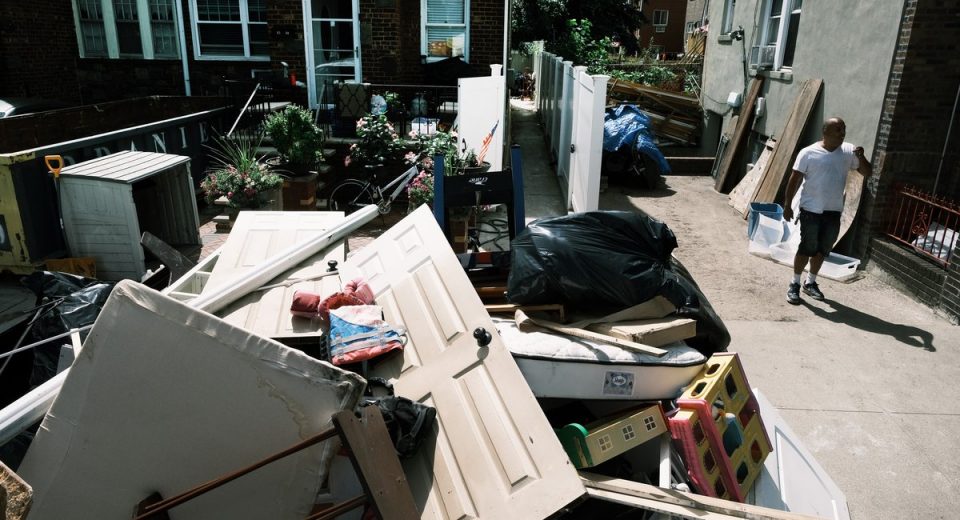 A year ago, the remnants of Hurricane Ida barreled through the New York metro area, dropping historic rainfall on the five boroughs, overwhelming the city’s sewer systems, and swamping low-lying areas across the city.

All told, the storm killed 50 people in New York and New Jersey: some were trapped in their cars on waterlogged roadways, while others couldn’t escape flooded unregulated basement apartments.

Within a single hour, 3.15 inches of rain had fallen, breaking a record set just 11 days earlier, when 1.94 inches fell.

Parts of Queens ranging from East Elmhurst to Woodside to Ozone Park were badly hit. Other areas, like the Hole on the border of Brooklyn and Queens — which was never connected to the city’s sewer system — stayed waterlogged for weeks after.

The storm highlighted a new threat New York City faces as climate change is projected to bring hurricanes with heavier rainfall. Flash-flooding could strike low-lying areas with poor drainage anywhere, while coastal areas still face threats from storm surges, like what happened during Hurricane Sandy a decade ago.

Advocates and elected officials planned to mark the grim milestone on Thursday with events throughout the day. Mayor Eric Adams was set to make an announcement in South Ozone Park, while Gov. Kathy Hochul planned to address the public from a community center on the border of East Elmhurst and Corona, another area badly hit by flooding.

A candlelight vigil was planned for Diversity Plaza in Jackson Heights on Thursday night, calling again for city and state officials to come up with a pathway to bring basement apartments up to code.

But after a year since the storm, Gothamist recently reported, basement apartment tenants still face many of the same dangers. While Adams and Hochul both have said they support creating a pathway to bring basement apartments up to residential code, a bill that would have allowed that to happen stalled in the state Legislature last session.

While the bill is stalled and lawmakers are figuring out how to bring basement apartments up to residential code, New York City Comptroller Brad Lander has proposed the creation of a Basement Board to guarantee basement tenants basic safety protections, such as smoke alarms. It’s a similar model to the city’s loft law and Loft Board, which oversees renters in those types of apartments.

Other groups, like the Regional Plan Association, have called on New York City to dramatically ramp up its plans to capture excess rainwater.

Many residents hit by flooding have struggled to rebuild their lives.

The City reported 109 displaced families were still living in hotels.

The U.S. Federal Emergency Management Agency paid out more than $476 million to 86,000 households in New York and New Jersey, amounting to about $5,500 per household.

The U.S. Small Business Administration loaned an additional $460 million to 9,602 families in both states.

Extra Extra: Westfield, N.J. residents would prefer if you didn't show up to watch the 'The Watcher' house