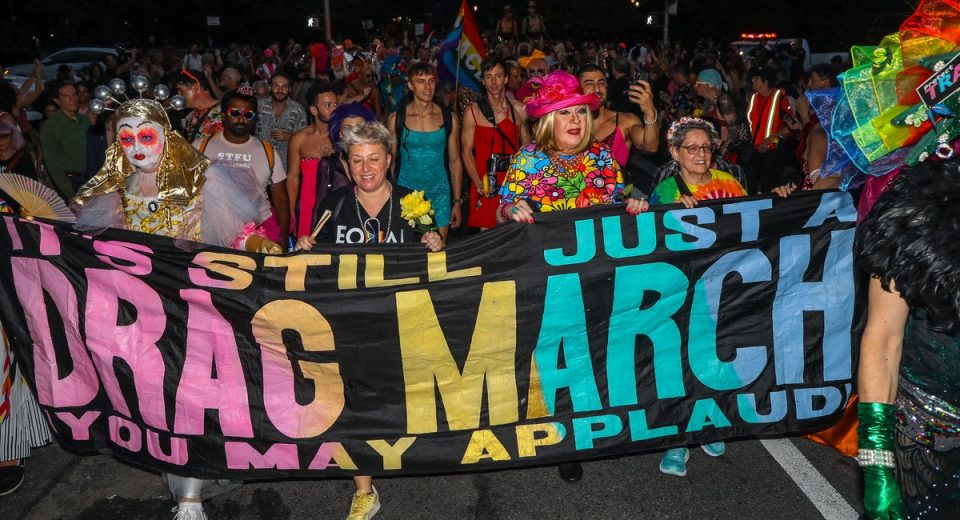 The outfits, of course and as always, were spectacular, and the mutual support and love on display as the drag community gathered in Tompkins Square Park last night was palpable. But with LGBTQ+ rights under attack across America, drag queens openly vilified by the right and the Supreme Court overturning Roe v Wade yesterday, there was also plenty of anger in the air at the 28th annual Drag March.

Harmonie Moore of the Church Ladies For Choice, for example, introduced herself yesterday evening as “Harmonie Moore as in How many more women must die of botched illegal abortions due to the facist injustices of the American right wing and psycho Christian lap dogs.”

Drag March, it should be noted, has always been a protest, not a parade. In 1994, the organizers of the official Pride March, which that year was celebrating the 25th anniversary of the Stonewall riots that kickstarted the Gay Rights movement, effectively banned drag queens and leathermen from the festivities, fearing the loss of corporate sponsors.

The drag queens and kings began assembling in Tompkins at around 7:00 yesterday evening, stepping off onto Ninth Street after about 90 minutes of hugging, admiring outfits and performing the protective “we cast the circle” ritual, for the march across town to the Stonewall Inn.

The chants of Drag March have always been cheeky and defiant, and this year the traditional “Ten percent is not enough: Recruit! Recruit! Recruit!” was updated as “Groom! Groom! Groom!” But it was the overturning of Roe, and the threats of what likely might come next, that was on everyone’s mind. Shouts of “Abort the Court” accompanied the march all the way across town.

Still, this is Pride, a celebration of being who you really are. As Hell’s Kitchen resident Justin Gerhard, put it: “Drag March is everything that queer New York City life is about. It all culminates in this moment where we as queer people express ourselves in every way, shape and form you could possibly imagine, and more that you couldn’t even have imagined until you got here. We exist as a powerhouse force in this city, and that’s why I love New York.”

Amazon, robots, and diverging views of automation and the future of work – GeekWire