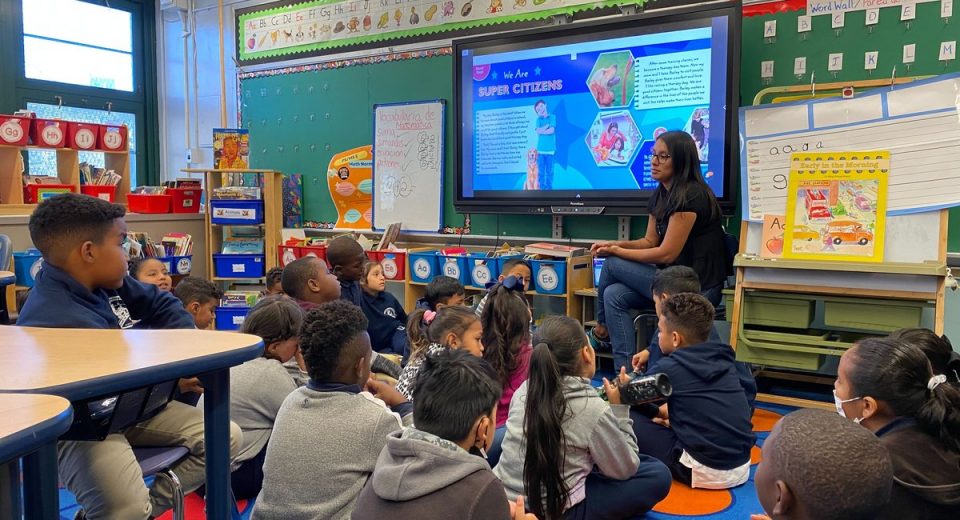 A South Bronx school has welcomed dozens of asylum seekers this month, setting off a scramble to meet the needs of students living in shelters after their traumatic journeys to the southern border of the U.S.

The roughly 65 new students arrived at P.S./M.S. 5 in need of clothes, medical help, and school supplies. Some had severe anxiety and panicked when apart from their families.

“I had a seventh grader that couldn’t even write her name,” said Bernadette Miele, who teaches English in a bilingual classroom that has nearly doubled to 30 kids this year.

Miele recalled the student seemed anxious and embarrassed when given written tasks in Spanish. After class, the student confessed she was illiterate.

The ongoing effort at the school highlights the strain asylum seekers have put on New York City government. Since the spring, more than 14,600 people have arrived from the southern border aboard buses sent by Texas Gov. Greg Abbott, a Republican, and El Paso Mayor Oscar Leeser, a Democrat. Around 11,000 of them are currently living in city shelters, according to Kate Smart, a spokeswoman for Mayor Eric Adams.

Prior to the start of the school year, Education Chancellor David Banks touted a multi-agency effort, “Project Open Arms,” to welcome the kids with specialized language assistance, pediatric care, academic help, and mental health resources. That initiative, however, does not provide individual schools with additional funding, said Nathaniel Styer, a spokesman for the education department.

P.S./M.S. 5 is operating on a budget tied to outdated projections anticipating a drop in enrollment. The school had been projected to have around 498 students this year. There are 620 kids at the school, said Principal Danielle Keane.

The education department said it is processing school budget appeals on a rolling basis.

“Every school receives a midyear adjustment late this fall, which will account for any changes in student enrollment, ensuring that every school has the resources they need to support all of their students,” agency spokeswoman Jenna Lyle said.

Andrea Ortiz, the senior manager of education policy at the New York Immigration Coalition, said the administration’s push to enroll children in public school was a good start, but that she’s waiting to see a long term plan for schools that receive asylum seekers.

“We also have not heard of a plan to properly fund the schools that are going to have to serve this population,” Ortiz said.

Keane doesn’t have time to wait.

She’s put out an urgent call for donations of all kinds to local nonprofits, advocates, and surrounding neighborhoods. A winter coat drive is already underway. Christmas gifts are accumulating in the school basement.

“We get really strategic,” Keane said. “We can’t wait for funding to come in. The kids need it now.”

Miele recalled a mentor telling her in grad school that over her career she’d likely encounter one or two students with months or yearslong “interrupted education” gaps.

This year, Miele has more than a dozen students with large gaps in schooling in a single class.

“Some of them just don’t even know how to read,” Miele said. “The needs are overwhelming.”

IPads issued by the education department are cherished by the asylum seekers – but teaching them to use the devices for lessons is another challenge.

“They’re so afraid that they’re gonna drop it,” Miele said. “But most of them have no idea how to navigate the iPad to do school work.”

At first staffers were focused on triage, finding kids everything from socks and underwear to emergency medical care.

Two students needed to be hospitalized in intensive care for injuries sustained during their journey to the U.S., Keane said. Staff noticed another child was limping and soon identified an infected foot wound caused by a trek through the Central American jungle.

As the school year enters its second month, kids are still reeling from the emotional and psychological impact of their journeys, staff said. Many of the kids came from Venezuela and Colombia. They live in three nearby hotels that are serving as shelters.

Some asylum-seeking students suffer from extreme separation anxiety. To address the problem, teachers allowed siblings in different grades to visit each other during class.

“If a child’s gonna feel better by checking in on a younger sibling and they’re not gonna be able to focus until they know they’re safe, then do the check-ins,” Keane said.

Jennifer Martinez, a temporary housing community coordinator who serves as a liaison between the school and families living in shelters, previously had a caseload of 30 kids. Now she’s responsible for around 90. The asylum seekers’ placement at P.S./M.S. 5, Martinez explained, was part of a plan.

“[We] realized that it would be better if we placed them together,” she said. “They could build community and build a buddy system in terms of getting the children to school.”

Across the city, the number of children living in shelters is on the rise, back up to pre-pandemic levels. There were 19,121 by mid-September. That’s 4,742 more children in the shelter system than on April 1, according to city data.

Extra Extra: All 'I Voted' stickers should be designed by 14-year-olds