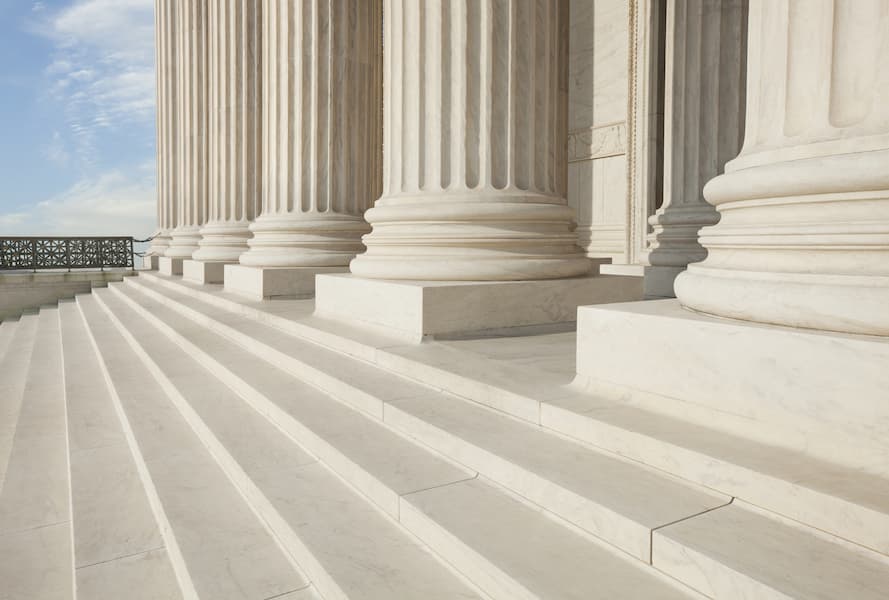 In Ramirez v. Collier, 595 U. S. ____ (2022), the U.S. Supreme Court held that Texas can’t execute a man death row unless it allows his pastor to pray and lay hands on him while he is executed. The Court specifically held that Ramirez is likely to succeed on his claims under the Religious Land Use and Institutionalized Persons Act (RLUIPA) because Texas’s restrictions on religious touch and audible prayer in the execution chamber burden religious exercise and are not the least restrictive means of furthering the State’s compelling interests.

Facts of the Case

A Texas jury sentenced John Ramirez to death after he brutally murdered Pablo Castro in 2004. On February 5, 2021, after years of direct and collateral proceedings concerning Ramirez’s conviction, sentence, and aspects of his execution, Texas informed Ramirez that his execution date would be September 8, 2021. Ramirez then filed a prison grievance requesting that the State allow his long-time pastor to be present in the execution chamber, which Texas initially denied. Texas later changed course and amended its execution protocol to allow a prisoner’s spiritual advisor to enter the execution chamber.

On June 11, 2021, Ramirez filed another prison grievance asking that his pastor be permitted to “lay hands” on him and “pray over” him during his execution, acts Ramirez’s grievance explains are part of his faith. Texas denied Ramirez’s request on July 2, 2021, stating that spiritual advisors are not allowed to touch an inmate in the execution chamber. Texas pointed to no provision of its execution protocol requiring this result, and the State had a history of allowing prison chaplains to engage in such activities during executions. Ramirez appealed within the prison system by filing a Step 2 grievance on July 8, 2021.

With less than a month until his execution date, and no ruling on his Step 2 grievance, Ramirez filed suit in Federal District Court on August 10, 2021. Ramirez alleged that the refusal of prison officials to allow his pastor to lay hands on him in the execution chamber violated his rights under the Religious Land Use and Institutionalized Persons Act of 2000 (RLUIPA) and the First Amendment. Ramirez sought preliminary and permanent injunctive relief barring state officials from executing him unless they granted the requested religious accommodation.

On August 16, 2021, Ramirez’s attorney inquired whether Ramirez’s pastor would be allowed to pray audibly with him during the execution. After prison officials said no, Ramirez filed an amended complaint seeking an injunction that would allow his pastor to lay hands on him and pray with him during the execution. Ramirez also sought a stay of execution while the District Court considered his claims. The District Court denied the request, as did the Fifth Circuit. This Court then stayed Ramirez’s execution, granted certiorari, and heard argument on an expedited basis.

By a vote of 8-1, the Court reversed, concluding that because Ramirez was likely to succeed on his RLUIPA claim and, thus, his execution without the requested participation of his pastor should be halted pending full consideration of his claims on a complete record. Chief Justice John Roberts wrote on behalf of the Court.

The Court first rejected the prison officials’ threshold contention that Ramirez couldn’t succeed on his claims because he failed to exhaust all available remedies before filing suit as mandated by the Prison Litigation Reform Act of 1995. According to the Court, Ramirez properly exhausted his administrative remedies. As Chief Justice Roberts noted, Ramirez tried (unsuccessfully) to resolve the issue informally with a prison chaplain. He then filed a Step 1 grievance requesting that his pastor be allowed to “ ‘lay hands on me’ & pray over me while I am being executed.” Prison officials denied that grievance, and Ramirez timely appealed. His Step 2 grievance reiterated the same requests. Ramirez’s grievances thus “clearly stated” that he wished to have his pastor touch him and pray with him during his execution.

The Court next turned to the merits of Ramirez’s RLUIPA claims. As Chief Justice Roberts explained, RLUIPA provides that “[n]o government shall impose a substantial burden on the religious exercise of a person residing in or confined to an institution” unless the government demonstrates that the burden imposed on that person is the least restrictive means of furthering a compelling governmental interest. The Court first found that Ramirez was likely to succeed in proving that his religious requests are “sincerely based on a religious belief.” In support, it cited that both the laying on of hands and prayer are traditional forms of religious exercise, and Ramirez’s pastor confirmed that prayer accompanied by touch is a significant part of their shared faith tradition.

The Court also found that the State has not shown that it is likely to carry the burden of demonstrating that its refusal to accommodate Ramirez’s religious exercise is the least restrictive means of furthering the government’s compelling interests. With regard to audible prayer, the Court found that Texas failed to show that a categorical ban on audible prayer is the least restrictive means of furthering this compelling interest, and failed to explain why other jurisdictions can accommodate audible prayer but Texas cannot feasibly do so. While the Court acknowledged that Texas has a compelling interest in preventing disruptions of any sort and maintaining solemnity and decorum in the execution chamber, it noted that the provided no indication that Ramirez’s pastor would cause the sorts of disruptions that respondents fear.

“What’s more, there appear to be less restrictive ways to handle any concerns. Prison officials could impose reasonable restrictions on audible prayer in the execution chamber—such as limiting the volume of any prayer so that medical officials can monitor an inmate’s condition, requiring silence during critical points in the execution process (including when an execution warrant is read or officials must communicate with one another), allowing a spiritual advisor to speak only with the inmate, and subjecting advisors to immediate removal for failure to comply with any rule,” Chief Justice Roberts wrote. “Prison officials could also require spiritual advisors to sign penalty-backed pledges agreeing to abide by all such limitations.”

The Court went on to conclude that Ramirez was also likely to prevail on his claim that Texas’s categorical ban on religious touch in the execution chamber is inconsistent with his rights under RLUIPA. While Texas cited three compelling governmental interests it says the ban on touch furthers: security in the execution chamber, preventing unnecessary suffering of the prisoner, and avoiding further emotional trauma to the victim’s family members, the Court found that the state failed to show that a categorical ban on touch is the least restrictive means of accomplishing any of these commendable goals. The Court agreed with Ramirez that Texas’s concerns could reasonably addressed by means short of banning all touch in the execution chamber. “Texas does nothing to rebut these obvious alternatives, instead suggesting that it is Ramirez’s burden to ‘identify any less restrictive means.,’” Chief Justice Roberts wrote. “That gets things backward.”

The Court further determined that the balance of equities and public interest weighed in Ramirez’s favor. “Ramirez ‘does not seek an open-ended stay of execution.’ Rather, he requests a tailored injunction requiring that Texas permit audible prayer and religious touch during his execution,” Roberts explained. “By passing RLUIPA, Congress determined that prisoners like Ramirez have a strong interest in avoiding substantial burdens on their religious exercise, even while confined. At the same time, ‘[b]oth the State and the victims of crime have an important interest in the timely enforcement of a sentence.’ Given these respective interests, a tailored injunction of the sort Ramirez seeks—rather than a stay of execution—will be the proper form of equitable relief when a prisoner raises a RLUIPA claim in the execution context.”