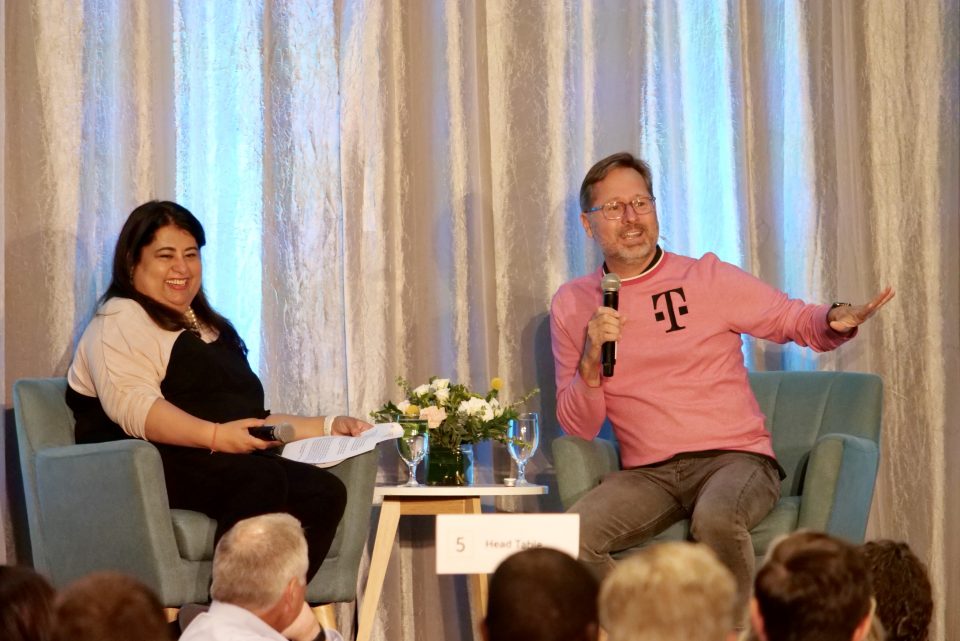 T-Mobile CEO Mike Sievert was a featured speaker at a luncheon Thursday hosted by the Seattle Metropolitan Chamber of Commerce. Sievert joined Bellevue, Wash.-based T-Mobile in 2012 and became CEO in 2020, just after T-Mobile merged with Sprint. Here’s a rundown of his comments.

“It’s maybe one of the biggest pain points we’ve ever set out to try and tackle: dead zones,” said Sievert, who announced the deal last month with SpaceX CEO Elon Musk at SpaceX’s Starbase facility in South Texas.

The partnership calls for creating a new network, composed of Starlink satellites that can use T-Mobile’s mid-band spectrum nationwide. The beta version of Starlink’s broadband boost won’t start rolling out in select areas until next year, after a series of SpaceX satellite launches. That rollout will begin with text messaging, including SMS, MMS and messaging apps. Voice and data coverage will come later.

“We don’t know exactly how fast it will come together. But our dream is that your existing smartphone, the one you already have, with no new technology required, will be able to connect to Starlink satellites orbiting the Earth and you’ll be able to have real-time messaging, emergency messaging, picture messaging, real-time communication not only via text, but popular messaging apps,” Sievert said Thursday. “If everything goes to plan we should be in full beta by the end of next year.”

GeekWire approached Sievert after his on-stage interview and asked follow-up questions related to the SpaceX deal but he declined to answer.

On the Seattle region and the business industry

Sievert is a member of Challenge Seattle, a coalition of top CEOs tackling regional issues including homelessness and educational inequities. He said lawmakers need to understand “the vital role of business in creating a vibrant economy.”

“There are plenty of policymakers that are so obsessed with dividing up the pie, that they forget there needs to be a pie,” he said. “And the role of business is to make sure there’s a pie. That means we have to invest and we have to innovate and it has to happen here.”

T-Mobile last year rolled out a framework called Equity in Action for its diversity, equity, and inclusion efforts. Sievert talked about how the company develops talent, describing it as a “dual approach.”

“While we are a large Seattle company, one thing I need this room to understand is most of our employees live and work in the reddest counties of the reddest states,” he said. “And so we needed to strike a strategy that would be true to our values, but also a strategy that would be successful in enrolling tens of thousands of people from every corner of this country.”

The strategy is focused on making sure the company’s development and mentorship programs are overrepresented with women and minorities, and that every open position includes interviewer pools that represent diversity and candidates that represent increases in diversity for the company.

And, it is focused on hiring “the very best person for the job, without affirmative action or without any input as to their race or gender,” Sievert said.

Editor’s note: Holli Martinez, vice president of diversity, equity and inclusion at T-Mobile, will speak at the GeekWire Summit on Oct. 6 in Seattle.