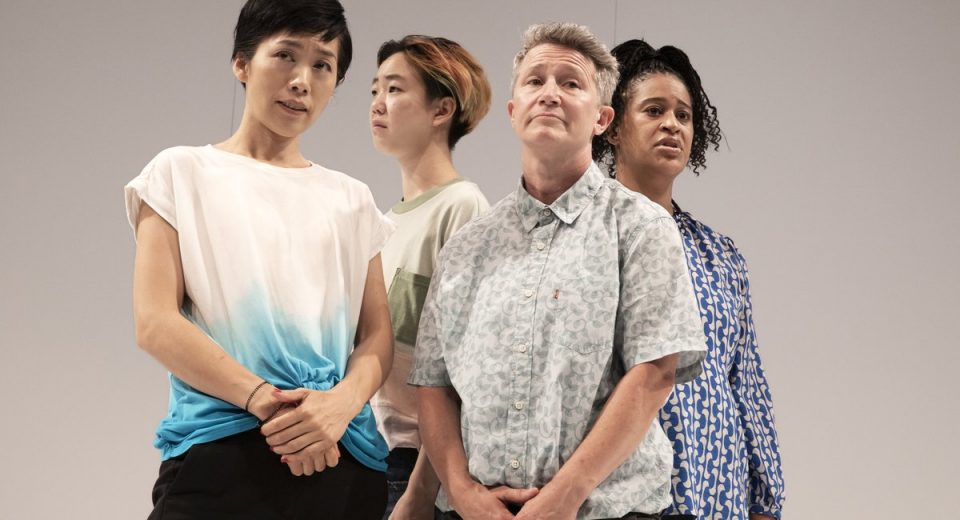 An evening out at the theater is almost always a welcome opportunity, but every now and then it’s something more: an experience that transcends entertainment and really gets under your skin in a profound way. That’s the way I felt about “The Nosebleed,” which is running now in the intimate Claire Tow Theater, produced by Lincoln Center Theater/LCT3.

“The Nosebleed” was written by Aya Ogawa, who’s a Brooklyn-based playwright, director, performer and translator. The play was produced previously at the Japan Society, and it’s racked up some impressive reviews in its various iterations. The idea starts out simple: Ogawa addresses the audience directly, talking about the subject of failure, and gradually works her way toward confessing her own failure to provide a proper memorial for a father with whom she had a challenging relationship.

Four more actors come to the stage, each revealing some small, possibly trivial failure – kind of making it clear to the audience that everyone makes mistakes. The actors mostly play Ogawa for the rest of the evening, while Ogawa sticks around to play her youngest son and, eventually, her father.

Failure remains the key theme throughout – identity and obligation are also major threads. Audience participation is enlisted in various ways. And what “The Nosebleed” ultimately suggests is that it’s never too late to find your peace – as Ogawa does onstage, with her cast and selected audience members. The conclusion is filled with profundity and delirious beauty. Through August 28th; lct.org

Coming up on Friday, August 19th, trumpeter, composer and bandleader Arturo O’Farrill and the Afro Latin Jazz Orchestra present the U.S. premiere of “The Cuban-Khaleeji Project.” This is the U.S. premiere of a project originally commissioned by The Arts Center at NYU Abu Dhabi. And it makes sense to present this at Little Island, the man-made arts and recreational facility that juts out into the Hudson River at Pier 55, between 13th and 15th Streets, because the project is meant to explore Arab, Moorish and North African roots of Afro Latin and Afro Cuban music, as well as the music of seafaring peoples around the Arabian Gulf.

The project is being presented here by Little Island in conjunction with the Afro Latin Jazz Alliance, an organization involved with performance, education and presentation of music from throughout the Americas. And to vividly illuminate the ties between African, Afro Cuban and Arabic musical traditions, O’Farrill and his 18-piece band are welcoming some heavyweight guests: Kuwaiti percussion ensemble Boom.Diwan, led by composer Ghazi Al-Mulaifi, British-Bahraini trumpet player Yazz Ahmed, Moroccan vocalist Malika Zarra and Emerati oud master Ali Obaid. Aug. 19th – 21st at 8 p.m.; littleisland.org

NYC’s economy is growing. So why is Mayor Eric Adams bracing for a fiscal crisis?