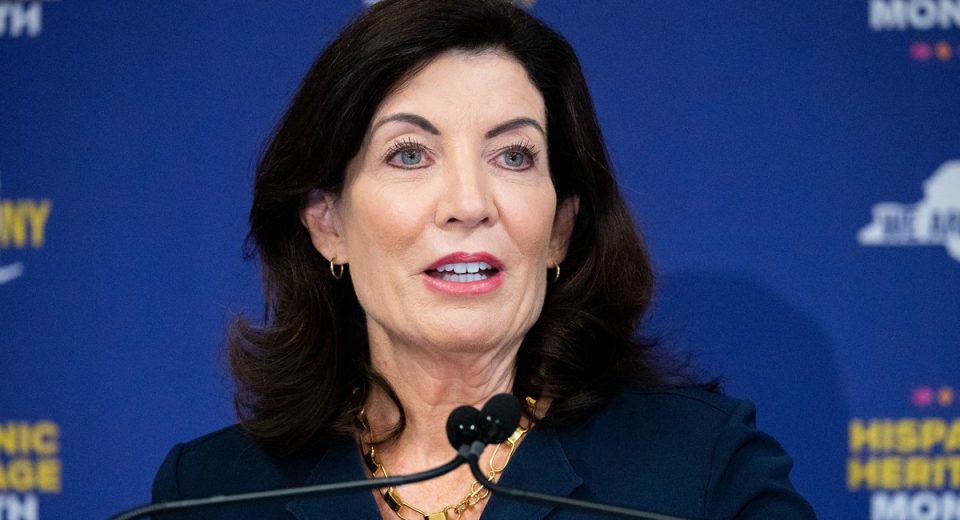 New York Gov. Kathy Hochul’s administration paid more than $600 million to buy 52 million at-home COVID-19 tests from a company led by one of her major campaign donors. And last week, she said she wouldn’t hesitate to do it again if she had to.

Hochul’s Republican opponent, Rep. Lee Zeldin of Long Island, has seized on what’s become a looming issue in the race for governor, unveiling a new television ad last week accusing Hochul of engaging in “pay to play” and rigging the COVID test spending to benefit her supporters.

The Democratic governor disputes Zeldin’s take: New York was staring down the omicron wave and had to amass tests to get kids back in school, and Digital Gadgets — the company owned by Charlie Tebele, one of her major campaign donors — could deliver the goods.

“I would do that all over again,” Hochul told reporters on Wednesday in Albany. “I needed to get people protected.”

Here’s what we know — and what we don’t — about the major COVID test purchase that’s sure to remain one of the major issues in the closing weeks of the 2022 gubernatorial campaign, which was first reported by the Times Union of Albany.

Why was NY buying so many COVID tests?

It was December 2021. COVID rates were sharply rising in New York, thanks to the appearance of the omicron variant. And schools across New York were faced with the conundrum of how to welcome students back from winter break at a time when the virus was surging.

So Hochul’s administration worked with school officials in New York City and across the state to come up with a reopening plan that called for a flood of at-home COVID tests made available for free to students, particularly when their classes had been exposed to the virus.

“They can be in hand for the school districts to be able to deploy them the way they choose,” Hochul said of the test kits at a Dec. 27 press conference, just as the state was making arrangements to purchase millions of tests, including 1 million for the New York City school system alone.

Since December, the state has doled out more than 94 million at-home tests, according to the state Division of Homeland Security and Emergency Services, which has overseen distribution of the kits. It also keeps about 14 million on hand in its stockpile, in case of a surge.

What is Digital Gadgets? And what is the company’s connection to Hochul?

Digital Gadgets LLC is a New Jersey-based company that, at least until the COVID pandemic, specialized in consumer electronics, accessories, and, well, gadgets — things like Alexa-enabled smart sockets sold on QVC.

But in the early days of the pandemic, as the world rushed to secure personal protective equipment in short supply, the company (or a subsidiary) pivoted, just as many other companies did at the time with encouragement from the government. Digital Gadgets began contracting with governments to sell masks, ventilators, and, eventually, at-home COVID tests.

The company’s connection to Hochul is evident in state campaign finance records.

Charlie Tebele is Digital Gadgets’ founder and CEO. He and his family have given more than $290,000 to Hochul’s election campaign, with Tebele himself giving the maximum individual contribution of $69,700. That includes more than $9,000 in “in-kind” contributions — money Tebele apparently spent hosting fundraisers in November and April for the Democratic governor, according to the Times Union.

James Tebele, a member of the family, was also apparently given a role on Hochul’s campaign, first as an intern and then as a “finance associate,” according to his LinkedIn profile and Hochul’s campaign spending records.

The Tebele family also contributed tens of thousands of dollars to former New York City Mayor Bill de Blasio’s various political campaigns, including his successful mayoral re-election in 2017 and his failed presidential and congressional bids in 2020 and 2022, respectively. James Tebele also had roles connected to de Blasio, first as an intern in his administration and later on his presidential campaign, according to the New York Post.

How many tests did NY buy from Digital Gadgets? And at what cost?

A lot. All told, New York state bought 52 million CareStart brand tests from Digital Gadgets, according to the company. The tests are approved by the Food and Drug Administration and manufactured by a company called Access Bio, with Digital Gadgets acting as a distributor. The Times Union reported that California purchased the same brand but directly from Access Bio.

It was a costly endeavor. Spending records show the New York State Department of Health sent a total of $637 million to Digital Gadgets for the tests from December 2021 through March 2022. That works out to a cost of $12.25 a test — not far off from the in-store price for many COVID at-home tests that aren’t purchased in massive bulk.

Another key piece of information: The state health department, which works under Hochul’s executive umbrella, purchased the tests from Digital Gadgets without having to follow state’s normal safeguards — including competitive bidding, which would have required the state to follow a process for soliciting offers from any vendors interested in providing the tests.

That’s because Hochul issued a new state of emergency on Nov. 26 — at the onset of the omicron wave, and four days after Tebele’s first in-kind contribution — that allowed her to suspend the state’s contracting rules to purchase supplies related to the COVID pandemic. She would go on to periodically renew those powers until last month, when she allowed them to expire.

Also of note, though unrelated to Hochul: De Blasio’s administration paid Digital Gadgets LLC in the early days of the pandemic for COVID-related supplies, including N95 masks. The spending totaled $25.8 million, according to city spending records. A larger, $91 million city contract for ventilators — first reported by The City — was ultimately canceled. De Blasio also appointed Charles Tebele to a seat on the city Economic Development Corp.

So is this pay to play? Was Hochul rewarding a donor?

Both Hochul and the company say no, not a chance. But her political foes aren’t convinced.

Hochul first addressed the controversy in July. She said New York needed a huge amount of tests in a quick period of time, and Digital Gadgets “could meet that need at the time that allowed us to deliver critically important test kits when nobody else, including the federal government, could get their hands on them.” The state also purchased smaller amounts of tests from three other companies: Spectrum Medical, Abbott, and iHealth.

At the same time, Hochul also said that at the time of the test purchases, she was “not aware that this (Digital Gadgets) was a company that had been supportive of me” — despite the fact that, as the Times Union would later report, Tebele had already hosted a fundraiser for her by that point.

Digital Gadgets, meanwhile, said the cost of the test kits was driven by two major factors: The massive inventory New York was looking to acquire at a time when securing tests was difficult, and a requirement the state issued on Dec. 30 for an extended expiration date that necessitated “flying in components from all over the world.”

According to the company, Digital Gadgets covered the costs associated with overtime, weekend pay and opening new production facilities so the test manufacturer could meet New York’s massive demand — not to mention chartering flights so the tests could be delivered.

“Digital Gadgets was able to secure these tests by committing hundreds of millions of dollars of capital to secure production lines all over the country and run them around the clock and on weekends and holidays in order to meet the quantity commitment, and also incurred significant expenses for labor and air freight in order to meet the agreed upon timelines, which they did,” company spokesperson John Gallagher said in a statement.

The company has also denied it discussed the purchase with Hochul or any member of her campaign staff.

“As we have previously stated, neither Mr. Tebele nor the company communicated in any way with the governor or the campaign about tests or any company business, and any implication to the contrary is false,” Gallagher said.